“All cities are complex but Athens has an especially tangled character—it’s both spectacularly ancient and undeniably modern.”—Sofka Zinovieff, author.

Athens has more layers than a moussaka. As the city reopens to tourism again this month, we bring you a brand new podcast series that’s designed to decode our captivating capital—with the help of acclaimed author and Athens-based anthropologist Sofka Zinovieff.

The new 8-part series, Athens Unpacked, premieres with its first two episodes on 19 May. Produced by Pod.gr for This is Athens, it follows last year’s popular podcast debut, We’ll Always Have Athens, in which high-profile Athenophiles from Stephen Fry to Mary Katrantzou shared their tales of Athens.

This time, we’re inviting listeners to come along for the ride as Zinovieff delves deep beneath the surface of Athens (literally at times!), in a quest to uncover the true essence of her adopted home of Athens, in all its guises, layers and mysteries. Listen to the trailer below and subscribe here.

“The more I understood about Athens after I moved here, the more deeply I was able to love this city, and engage and empathise with it,” says London-born Zinovieff. The author and journalist first visited Greece in the late 80s to research her social anthropology PhD, and returned 15 years ago to live in Athens with her Greek husband and their two daughters.

“People can get put off by Athens,” she concedes. “They arrive and it’s hot and busy and noisy and they don’t really know where to go; it’s overwhelming. But it’s very important to have a sense of the complexity of Athens and not just take it at superficial value.”

In each episode, Zinovieff enlists a rich pantheon of city experts and insiders—from celebrated singers and graffiti artists, to high profile journalists and street food chefs—to dig beyond the Acropolis into themes that the guidebooks rarely cover.

Subscribe to Athens Unpacked and you’ll visit a lesser-known aqueduct built by a Roman emperor; meet the capital’s most exposed skeleton; encounter the alternative culture behind Rembetika (Greece’s answer to the blues); climb an historic off-grid hill with a former archaeologist; experience a refugee neighbourhood; browse a bustling farmer’s market with a local foodie; and explore the omnipresent legacy of the ancient philosophers and politicians. 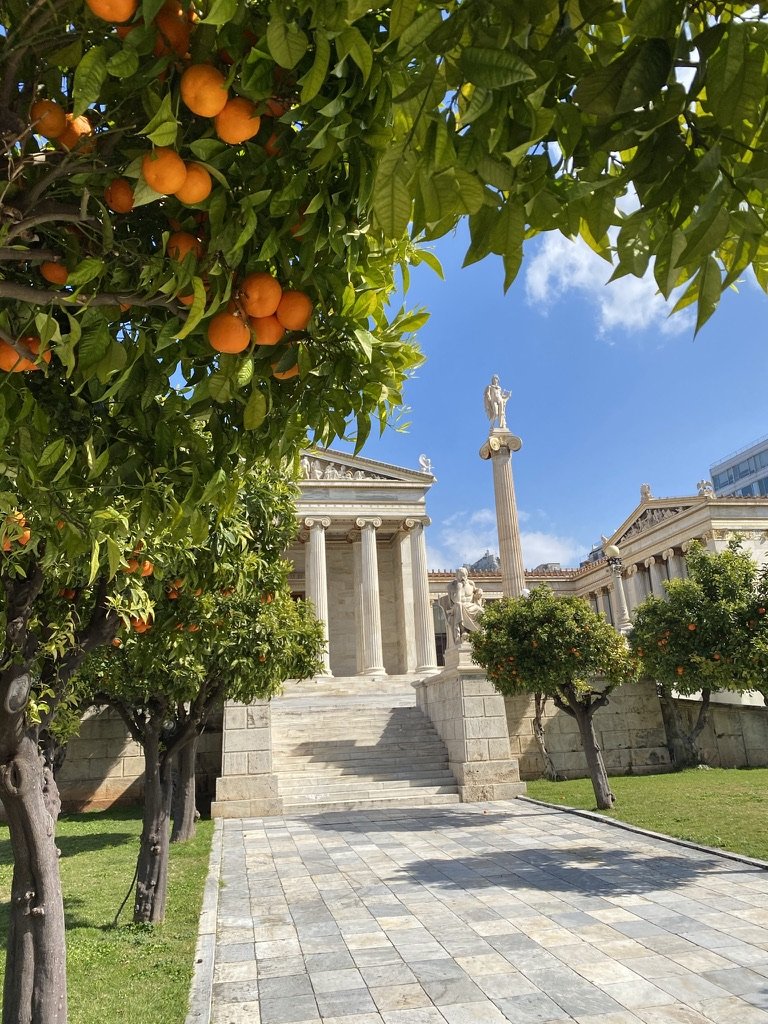 The expansive series, produced mostly during lockdown, is a brilliant way to connect with the heart and soul of Athens before your next visit.
“Athens Unpacked is like dipping your toes into deep waters,” says Zinovieff. “Every person I spoke to was so passionate and informed on their subject; they could have easily had a whole episode to themselves.”

For Zinovieff, who has written several books set in Athens, including “The House on Paradise Street” and “Eurydice Street: A Place in Athens”, the podcast turned into a family affair (in true Greek style). Her eldest daughter, a bouzouki and music teacher who fronts an all-female heavy metal band in London, wrote the theme music; while her youngest, a student and refugee volunteer, assisted with production and photography.

“I loved making Athens Unpacked,” says Zinovieff. “It reminded me why I chose this complex and seductive place as my home. “I really hope that the series helps open visitor’s eyes to the different layers of history in Athens, so that they aren’t just coming here to check off two or three tourist sites.

“As you walk around Athens, it’s worth remembering that nearly every step you take is on top of something remarkable; if not some undiscovered treasure.”

New episodes of Athens Unpacked will come out every fortnight. Subscribe now on Spotify, Apple Music, Pocket Casts, or wherever you listen to your podcasts, to make sure you don’t miss an episode.

Episode 7.  BIRTH AND DEATH THE ATHENIAN WAY Athenians remain attached to the traditions of the Orthodox Church, from lighting a candle in a little church while out shopping to wanting a priest at the major rites of passage from birth to death.

From popular songs to great poets, episode 6 of Athens Unpacked looks at the central place of poetry and music in Athenian life. Both the Asia Minor refugees’ rembetika and the traditional dimotika, ‘folk songs’ have influenced today’s creators and performers. The great composers, Theodorakis and Xatzidakis used the work of Nobel-prize winning poets lyrics