Walking calmly into the storm of child sexual abuse

A 40-year time frame, a large cast and shifting points of view bring nuance to this accomplished novel about consent, control and the transition to adulthood 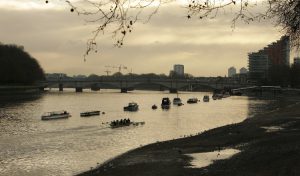 ‘Zinovieff writes the Thames as an anarchic, dirty presence coursing through the middle of London’.

For many of us, recent revelations of historical child sexual abusehave led to uncomfortable reflections on our own pasts. Where, in the 70s or 80s, did an adult’s friendliness shade into creepiness and creepiness shade into abuse – and were we harmed by what was not then thought harmful?
Sofka Zinovieff’s novel walks calmly into the centre of this storm. Daphne is nine when we first meet her in the 70s, the “free-spirited” child of Edmund, an academic, and Ellie, a Greek lawyer who has given up her City job for activism against the dictatorship of the colonels. There are no rules or routines in the family house on the river in Putney. Parents, children and friends come and go at will. There is always alcohol, often drugs and sometimes food. Adults and children play in the tree house and the river mud, dance and make music together.

Ralph, a composer and a friend of Edmund, finds this milieu fascinating and visits often, paying particular attention to Daphne. He enjoys acquiring rare gifts for her on his travels. What begins as (probably, mostly) innocent admiration progresses towards and then over the boundaries recognised even 40 years ago. There is no violence or pain for Daphne; she will believe then and for decades afterwards that she was knowing, consenting and unharmed. These issues of belief and memory bring the subject of historical child abuse close to the concerns of fiction: the question is not only whom we believe, but also when we believe a changing story.

Zinovieff does well in requiring her readers to see the relationship from Ralph’s point of view as well as Daphne’s. The novel pulls off a tricky juggling of voices and times so elegantly that you may not notice when a new voice is heard 30 years before or after the preceding one, but it is worth attending to the technical skill behind its music. Three voices swoop between the 70s and the present day, changing their minds as the story develops. Daphne is repairing her life after recovery from drug addiction as Ralph falls ill with cancer. Her childhood friend Jane, who witnessed the unsanctioned relationship and becomes again a confidante in adulthood, seems more volatile and less reliable than she thinks herself. The reader never quite knows whom to trust, whose version is final; guilt and innocence seep through memory and setting. One reaches and abandons judgments along the way, yet the pacing of the story and the integrity of the characters and voices instil confidence in the author. It is rare to find oneself reading so compulsively a book that promises no resolution or easy answers; I admired this combination of intellectual honesty and bravura storytelling. The conclusion, when it comes, is morally satisfying and plausibly complex: there is no betrayal of the novel’s architecture for a neat ending.

Putney is precisely located, not just beside Putney Bridge, but in particular parts of Athens and on the island of Aegina. Zinovieff writes the Thames as an anarchic, dirty presence coursing through the middle of London. She gives us urban and island Greece with the deft confidence of her memoir of emigrating to Athens, Eurydice Street. Weather, clothes and food are vividly described, from bread-and-cheese picnics on Greek harbours to the nursery cuisine of 70s England, as are the bizarre outfits assembled from market stalls by teenage Daphne. This is partly a novel about adolescence, and the teenagers of the era and their modern offspring are wholly convincing as they embark on the dangerous vacillations of innocence and experience. “Putney” is also the title of a collage made by the adult Daphne as she remembers her youthful relationship with Ralph, an initially nostalgic project that becomes darker and more uncomfortable as Jane challenges Daphne’s recollections and finally rediscovers her own story. The novel is more subtle than the collage, but this structuring device holds present-day Daphne at the centre of a story wobbling on its axis.

Inevitably, the 40-year time frame, the large cast and the changing points of view lead to the occasional dumping of information needed to get you to the next time and place, and there is an assumption that readers know London intimately. But these are small quibbles about a novel that is accomplished, timely and unusually well wrought.