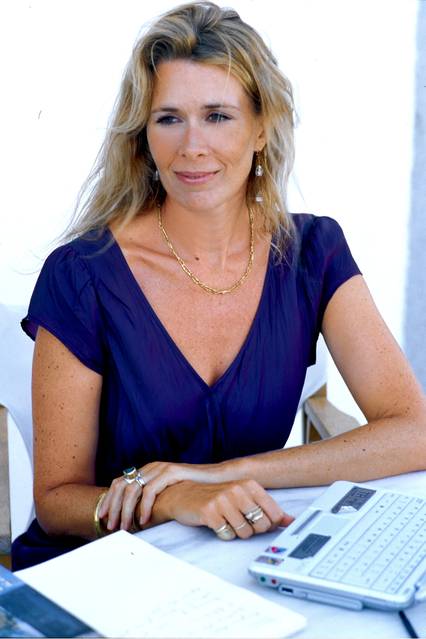 1. Evelyn Waugh used Lord Beauchamp’s family at Madresfield as a model for “Brideshead Revisted.” He was in love with the whole family and possibly had an affair with one of the sons, but it was Beauchamp himself, whose life was too extreme for fiction, who was the almost unrecognizable model for Lord Marchmain in “Brideshead.” Known as “Boom” for his loud voice, Lord Beauchamp was so formal that he referred to his children by their titles and insisted on liveried French footmen standing behind each dining chair. In less formal mode, he liked having his children chat to him while he took a bath. For relaxation he embroidered. In the fount of colorful detail that Ms. Byrne has amassed we learn that Boom was known for his “exquisite taste in footmen.” And that “one could hear the clunk of the jewellery as they served dinner.” Also that a guest one evening asked Harold Nicolson, “Did I hear Beauchamp whisper to the butler, ‘Je t’adore’?” “Nonsense,” Nicolson replied. “He said ‘Shut the door.’ ” Beauchamp’s same-sex relationships, illegal at the time, led to threats of prosecution and, in 1931, precipitate exile from England—a desperate time in which only the support of his devoted children kept him from committing suicide.

2. When Adam Nicolson went to live at Sissinghurst Castle, the legacy of his extraordinary grandparents loomed large. Here he gives a fresh perspective on the bizarre marriage of Vita Sackville-West and Harold Nicolson—a relationship that thrived on their intellectual partnership as successful writers but also on the freedom each gave the other to pursue homosexual affairs. Vita’s “elopement” with Violet Trefusis created a huge scandal in the 1920s and came to define her reputation as much as her books or her famed gardens. Since Sissinghurst was given to the National Trust in the 1960s, hordes of visitors from across the world have come to “drink at the shrine” of its “literary-lesbian-hortico-aristocratic amalgam,” Nicolson writes. Of Vita herself he notes that behind her stretched an inheritance of pure glamour. Her mother’s mother, Pepita, was a Spanish gypsy dancer who married Lord Sackville, and Vita was brought up in the family’s vast Kentish palace, Knole. Not inheriting the estate because she had been born a girl was a bitter blow from which Vita never fully recovered.

3. The Mitford sisters were rarely out of the news from the 1920s till the death of the last sister in 2014. The beautiful, intelligent Diana married Oswald Mosley, leader of the British fascists, and wrote to her sister Unity (who was in love with Hitler and shot herself almost fatally when war was declared), “The Führer is the kindest man in the world isn’t he?” Neither woman ever changed her opinion. Jessica became a lifelong communist and escaped her family to settle in America as a civil-rights activist and journalist. Nancy, the sharpest wit of the six, despised both “Nazis and Bolshies” and put her outlandish family into brilliantly satirical fiction. She also helped put Diana in prison during the war, describing her to the British authorities as “an extremely dangerous person.” Pamela, the quietest sibling, ended up living with a woman in the country and keeping chickens, while the youngest, Deborah, became Duchess of Devonshire, chatelaine of the palatial Chatsworth. Charlotte Mosley, Diana’s daughter-in-law, guides the reader through the countless nicknames, in-jokes, betrayals and intimacies with panache and expertise.

Children of the Sun

4. The character of the dandy lies at the heart of Green’s seminal study of decadence in England—a dandy being someone “dedicated solely to his own perfection through a ritual of taste.” After the devastation of the Great War came the era of the “Bright Young Things,” when, Green asserts, England was in “the grip of the pleasure principle.” It was a time of madcap fun, parties, nightclubbing, treasure hunts. But Green’s focus here is on the Eton- and Oxford-educated circle, many of them writers, who became known for their Wildean flamboyance, their mockery of earnestness. Their hedonistic dedication to aestheticism marked an entire generation.

5. Exceptionally tall and thin, with a crooked nose, Edith Sitwell had her Victorian adolescence marred by the humiliation of being strapped into “Bastille of steel” contraptions to correct her physical defects. Her parents were cold and cruel, her brothers (Osbert and Sacheverell) off at Eton and Oxford. Nobody could have predicted, in short, that Edith would become one of the artistic celebrities of her era. Famous for her elongated “Plantagenet” looks, she accentuated them with unusual clothes, turbans and huge rings. But she went on to more significant fame for her experimental poems and her literary criticism. Victoria Glendinning paints a marvelous picture of an insecure, awkward girl evolving into a grande dame, whose parties (strong tea and stale buns in a dark and dingy Bayswater flat) were a London institution for the artistic elite. Gertrude Stein, T.S. Eliot and Evelyn Waugh were among her many friends, and though she never married, she adored the gay Russian painter Pavel Tchelitchew, to whom she was a generous patron. Her collaboration with another of her protégés, the composer William Walton, produced one of her most lasting successes, in which Sitwell’s extraordinary Façade poems, which she began publishing in the early 1920s, were recited alongside Walton’s music from behind a curtain and through a mask—an entertainment that still delights audiences today.

Episode 7.  BIRTH AND DEATH THE ATHENIAN WAY Athenians remain attached to the traditions of the Orthodox Church, from lighting a candle in a little church while out shopping to wanting a priest at the major rites of passage from birth to death.

From popular songs to great poets, episode 6 of Athens Unpacked looks at the central place of poetry and music in Athenian life. Both the Asia Minor refugees’ rembetika and the traditional dimotika, ‘folk songs’ have influenced today’s creators and performers. The great composers, Theodorakis and Xatzidakis used the work of Nobel-prize winning poets lyrics